Right, here is a BIG one – we are being purposefully dumbed down and not allowed to access our true, natural genius.

“You are more powerful than you know and they fear the day you discover it!”

I remember listening to a talk by Sir Ken Robinson several years ago; about how backwards the education system is, and the imperative to implement major reform. Although he certainly gave an exceptional presentation on the matter, what ultimately captured my mind was the mention of what I now consider the most important study I have ever heard of in my life — a study in divergent thinking.

NASA — who houses the world’s foremost space program and some of the brightest people on the planet — contacted Dr George Land and Beth Jarman to develop a highly specialized test that would give them the means to effectively measure the creative potential of their rocket scientists and engineers. As a result, the duo came up with an unorthodox test, rooted in the process of divergent thinking; which is the ability to look at a particular problem and propose multiple solutions.

NASA were very pleased with the efficacy of the test results, and so it proved to be a huge success. But for Land and Jarman — who had obviously explored the concept of creativity in great detail whilst devising this test — they decided they wanted to explore and try understand the true source of creativity better. Was it a genetic trait? The result of life experience? Something else??

Because the test Land and Jarman created for NASA was so simple, it could actually be applied to any age group. So they found 1,600 children between the ages of 4 and 5, and decided to measure their progress. What they found shocked them.

Out of the 1,600 kids that took the test, 98% of them scored at genius level! Excited by these incredible findings, the team decided to turn this test into a longitudinal study, and give the same group of children the same test again in 5 years time. Once again their findings were quite shocking, but this time for conversely different reasons. Because these same children, by now in grade school, had rapidly declined to just 30%; a 68% reduction! The same study was conducted again 5 years later on the same group of kids — by now in highschool — and  they had dropped all the way down to just 12%!

Disturbed, but still intrigued by this fascinating study, Land decided to conduct this same test on adults aged 25 and up (with an average age of 31). After numerous studies, what he invariably found, was that less than 2% of all adults scored at genius level. And for those who question the consistency of these results — or think they may be isolated incidences — these results have actually been replicated more than a million times![1]

WE ARE BEING SYSTEMATICALLY DUMBED DOWN 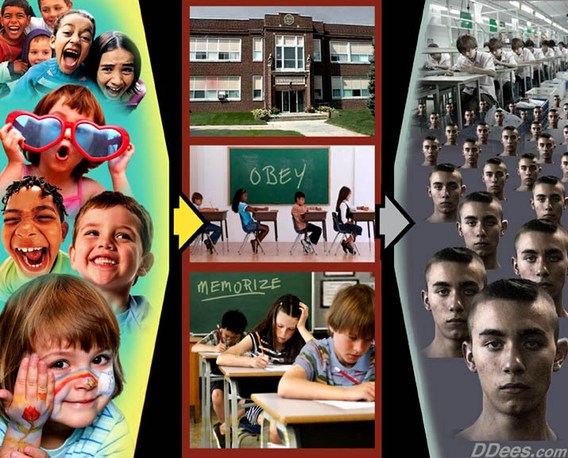 The implications of this profound study are rather self evident, I would say. We are innately born with the potential of a creative genius, but the moment we enter the school system, we get dramatically dumbed down. The reasoning for this, is not too difficult to apprehend; school, as we plainly call it, is an institution that has historically been put in place to ultimately serve the  wants of the ruling class, not the common people. Whether it be ancient Sparta, Germanic Prussia, or the more modern industrial American system, education has always served as a “lawful” means of mass indoctrination.[2]