To supplement yesterday’s post about coconut oil and cancer – here is more good news..
SO, is cancer incurable, do we  need to have a “War against Cancer”??!!

SOURCE of this article HERE: 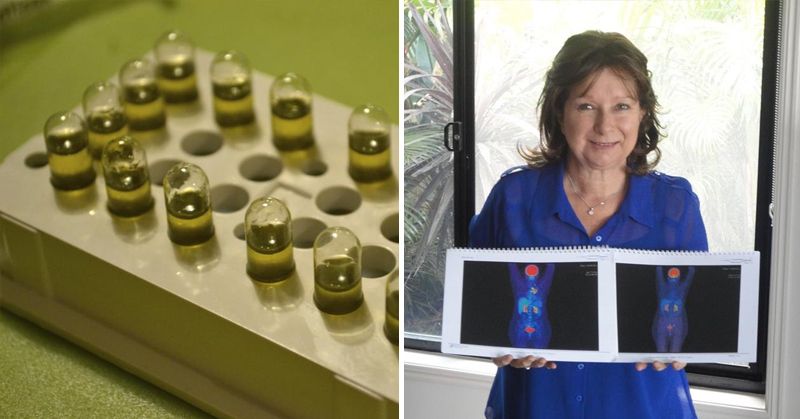 What to do if you have advanced terminal lung cancer that mainstream medicine even admits it can’t cure? Well some of you who have the wherewithal to obtain cannabis oil may know the answer to that. But what if you live in a nation that has no medical marijuana allowances at all? There are still many places like that. Australia is one of them.

Fortunately, the USA has some states’ approving medical marijuana as one of the few situations in this nation’s favor. But it took persistence from this Australian lady to find a way to get and use cannabis for healing. Her daughter suggested looking into cannabis after her mother received the oncologist’s death sentence of six months left to live with her cancer.

And she persevered with amazing results. After curing her stage 4 lung cancer within three (yes 3) months of using a special delivery technique for cannabis oil, she courageously posted an upbeat, outspoken youtube testimonial.

Courageously you say? Yes. She and her family appear to be very comfortably middle class, and all cannabis use is illegal in Australia. She was sticking her neck out with her video, which has gone viral now. She didn’t disclose her name or the name of anyone else in the video, which I intend to honor in this article for their protection.

Discovery and Healing Outside the Medical Monopoly Box

It was at the beginning of this year, 2014, that she was diagnosed with small cell lung carcinoma after several attempts to get a biopsy done to determine the extent of masses discovered by scans earlier. The verdict was disheartening to say the least.

Her oncologist claimed that radiation therapy was not possible and undergoing chemo would only prolong her life a few months with a considerably less than an optimum quality of life. So she and her husband researched the internet and found a few cannabis groups, mostly in the USA, and got what information she could along with how to make the oil and use it.

Perhaps they looked into suppositories as a solution and maybe not. But the solution they did create was mixing a half gram of coconut oil with a half gram of cannabis into a syringe, inserting the syringe rectally, and squeezing the total amount in twice daily.

This “backdoor” routine performed twice daily gave her the full daily amount of THC loaded cannabis needed to meet the one gram a day standard without the psychotropic effects of orally ingesting, vaping (using a vaporizer), or smoking cannabis.

As a matter of fact, when it comes to lung issues, the back door method is the best approach. From “Holistic Mamas” health site comes this excerpt from the book The Healing Intelligence of

Essential oils absorbed into the abdominal veins bypass the liver…they are fed directly into the heart-lung circulatory system without first being subjected to biotransformation by the liver detoxification enzyme system. Consequently, they reach the lower bronchial capillaries in their original lipophilic and volatile state, still capable of eliminating pathogenic microorganisms and dissolving and expectorating mucus.

The large intestine/bowel connection to lung issues has been utilized by TCM (Traditional Chinese Medicine) for many years and with ozone therapy for a few decades. It’s a bit surprising but not really new. More to the point, here’s a graph from cannabisdigest.ca with which surprisingly illustrates the efficacy of cannabis rectal absorption for lung issues while avoiding the THC “high”.

And here’s the Australian lady’s “happy video” testimonial with before and after PET scans.

The original Rick Simpson Oil (RSO) was made with a pound of hemp and naphtha, a toxic solvent that is highly flammable. But more recently smaller amounts of bud, an ounce or so, with 190 proof grain alcohol (95% alcohol by volume) to produce FECO (full extract cannabis oil) has been proven to work safely, easily, requiring less amounts of this wonder plant. This video explains how to do it yourself.